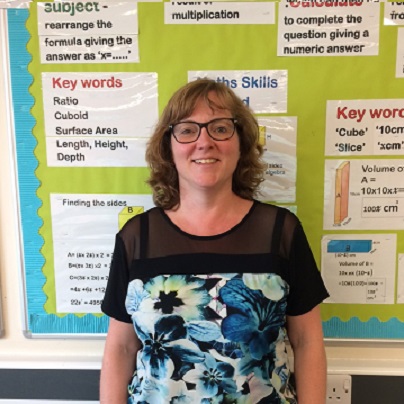 I have been a member of the Maths Department at Trinity C of E High School since 1993 and worked in a Second of department role before becoming an Advanced Skills Teacher in 2004. In this role I have supported colleagues in Primary and Secondary schools in Manchester. From Jan 2014 to August 2015 I was Acting Head of Department at Trinity.

As a Lead Practitioner I am a Subject Mentor for PGCE and School Direct trainees. I am an active member of the Maths Core Group since it started, where teachers from KS1 to KS5 work together to try to improve the teaching and learning of Maths across Manchester. We have held 2 conferences so far for Primary and Secondary teachers. A main focus has been the introduction of Mastery Teaching of Maths at KS1, KS2 and KS3.

This is an area of Maths that I am very enthusiastic about. As a result of being a member of this group and giving feedback to my department, my colleagues have attended the 2 conferences and have been involved in further Mastery training. Trinity has now fully embraced the Mastery way of teaching and since September 2017 our Y7 cohort have been following a Mastery Scheme of Work in fully mixed ability classes. The first year has been very successful, as a result we have continued to develop our Mastery Scheme of Work and from September 2018 Y8 will also be taught in this way keeping fully mixed ability groups.

Return to our System Leaders

Applications are now reopen with Teach Manchester School Direct! Please find us on UCAS to see what courses are sti… twitter.com/i/web/status/1…

Great Open Evening last night talking to potential Teach Manchester Trainees. If you missed out and would like to t… twitter.com/i/web/status/1…

Look at this job on Tes tes.com/jobs/vacancy/t…